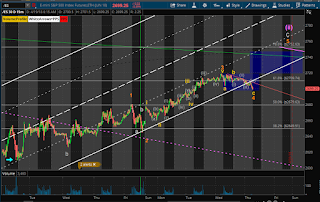 I'd appreciate a comment from anyone who is looking at my blog.

Over shooting the fork by just a little, but I'm still looking for five waves up to finish.
If I'm right about this the next fork will be down and it will Wave (iii) of Wave [iii].
Third waves pack a lot of power and move the furthest so expect the worst.


UPDATE:
Everything went pretty much as I expected today although Wave 4 was a bit more severe than I expected .  I believe we are now in Wave 5 of Wave c. So I'm looking for an up day tomorrow until we finish with another five wave pattern.  If the market should crash hard down then I'd say Wave (iii) has begun, but everything counts better the other way.

So I was taken back by FAZ going down while the general market was also down.  It doesn't happen very often, but the financial stocks were going against the grain today and that's what FAZ and FAS are based on.

Posted by Robert Campbell at 07:00