I made a small improvement to TTM_Propulsion tonight. According to John Carter when the 8/21 EMA crosses and you have a Green GO from TTM_Squeeze, you wait until a different Green dot appears on the Price Chart indicating that Price has retraced back to the 8 EMA. So tonight I added Green Dots to indicate when Price crosses the 8 EMA.

So hows that working out? Well in the chart the Green arrow gave the buy signal The Bars were green and the histogram was heading upward, and Squeeze gave the GO signal . Then the Price pulled back to the 8 EMA the Green dot appeared and we had everything we need to go long.

So far the market is up. We will have to watch this trade. There is still one thing I would like to add but I don't think TOS can chart across different time periods so the Anchor feature may not get added. Of course any one who what's it could pay John about $1000.00 for his program.

I've drawn a new upward Pitchfork since the downward fork was violated.

EW remains illusive. Watch the fork and I'll try to post an update on the TTM in the morning.
So far 45 minutes into the trade the /ES is up about 2 point since the trade. There has been no signal to cover yet.. Here's what it looks like now at 22:00 PST. The Blue highlight is where the trade was initiated. 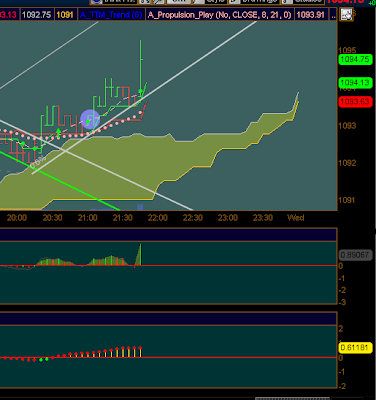 Well we didn't get much but the TTM indicators got us in and out at just the right places.
The exit signal is at the second blue highlight where the bars turned red and we touched the 21 EMA. Good Trade! 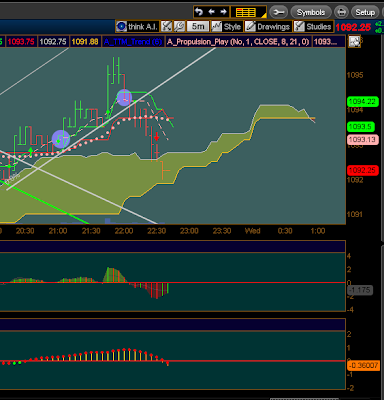 A Special Note about TTM Charts
The TTM_Series by John Carter is actually a little more complicated than I have described here in my charts. My recreation does not yet have all the functions of his program. His rule is to wait for a pullback to the 8 EMA to enter a new position. His Momentum histogram is proprietary. I used the TRIX because it appears to closely simulate his chart.

His program has the ability to overlap time periods, creating gray areas on the Trend Bars where the different "Anchors" are not in sync. Overall I think I have been able to recreate the best parts of his system.

John Carter has videos of each piece of his software. He demo them and teaches how to trade using them. He also reveals most of the methods he used to create each program.

To learn more watch the videos at Trade The Market. 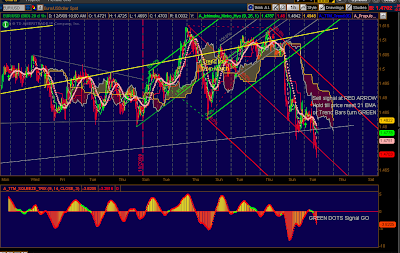 08:30 PST
These are the forks in play.
The Magenta fork is a forecasted fork using the center line.
Breaking the bottom range is key for the Bears. 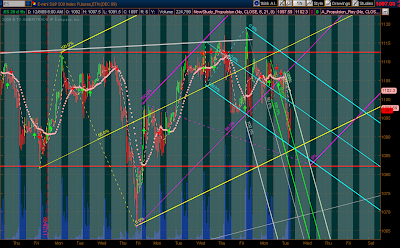 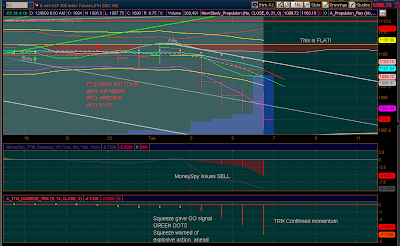 Can we break the range?

Posted by Robert Campbell at 06:49