Pathetic isn't it. Here I am still watching the market. I've notice there's a core group of traders who are so addicted we go through withdrawal on Friday's til Sunday. Maybe we should start a club or something.

Anyhow the downward forks seems to be holding. My feeling is that the Bears have finally gained control. Once we get past the Magenta and Yellow forks it will be a Bear fest! Perhaps we should plan a party or something to celebrate the end of life as we have known it.

It's awkward being a Bear, but hey we did not trash this economy! All we can do is make the best choice available while the world descends into strife and turmoil. 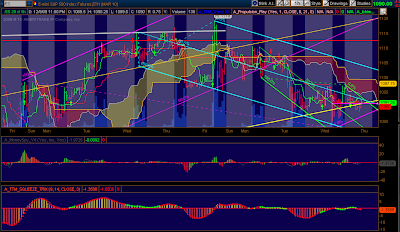 I've cried Bear Market too many times for anyone to listen, but this feels so right this time. I believe we are in a wave 4 of the smallest degree. Wave 5 will deceptively stop us at 1085, and we will get the pause before the storm. Oh why would anyone believe me now? Well take a look at the EUR/USD. I may be all wrong, but this looks like a very bearish Elliott Wave. OMG Elliott's back! Yes I admit I had to lock Elliott in his room for a while. This aren't even his regular toys, but you get the idea. I'm too tired to think about colors right now. 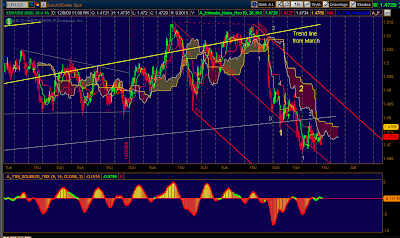 Back to the /ES. The Squeeze is warning of more volatility. Remember earlier today I said the same thing? 12 maybe 13 points in 3-1/2 hours. That's a pretty good move. Well I'm so tired I hurt so I'll see you in the morning.

Darn, TTM got stopped out at about 1093 or 1094 when the Trend Bar turned RED and the 21 EMA was broken. I'll have to watch John's video one more time but I'm pretty sure that's where the stops are placed.

I checked the video and these stops are correct. 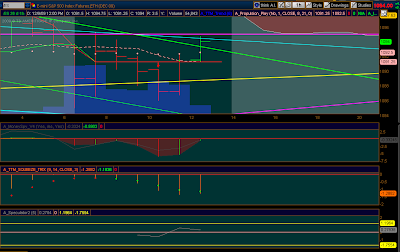 TTM has given the ready to sell signal, but the 8MA has not triggered a green light. Just my opinion, but I don't think it will happen. TTM is geared toward very safe trades.

By waiting for the 8MA signal, the potential for loss is reduced, and profit on that trade maximized. Second guessing the system would be a choice each person would have to make. TTM is not concerned about missing trades; it's all about capital preservation.

Andrews Pitchforks are each calling to Price, but Price is being fickle. It's certainly testing the Yellow fork and the Green and Blue forks seem to be taking the lead. 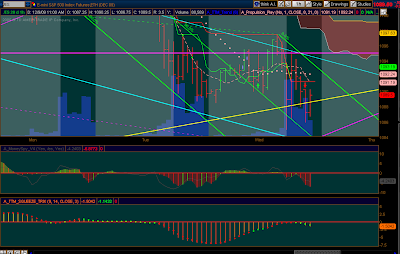 Squeeze is signaling a Go which indicates a higher probability of volatility ahead.
GO does not mean trade. The other elements of TTM have to agree and then the green light from the 8MA needs to give the final signal. TTM is a series of conditions and checking across different periods is advantageous.
MoneySpy is still Bearish.

If I were to count the waves I'd say we just finished a five count so a correction would seem more likely.

Price is still choosing a fork to obey. 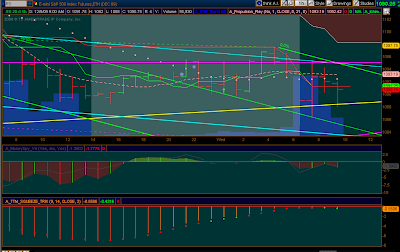 Several forks at work here. The magenta fork was drawn at 08:30 yesterday. Look at where we turned this morning!

I adjusted the green fork and now we have a map to the future market action.
MoneySpy is negative on both the Daily and the hourly.

TTM had a buy early this morning in the after hours but it was stopped out with a break even. It is now Bearish but not short.

Ichimoku is bearish with restistance from the Kumo and the MAs just overhead. 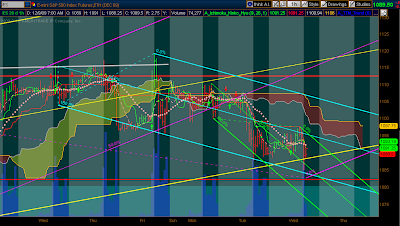 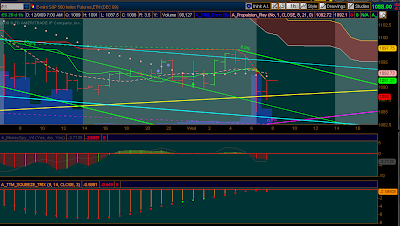 Posted by Robert Campbell at 07:17